Over 100 years ago (1898), in Kensington, Minnesota an immigrant of Sweden, by the name of Olof Ohman (and his son) were clearing a field for the purpose of gardening.  They accidently unearthed a 202 pound stone that was entwined within the root network of a tree which they had uprooted during the clearing process. It has forever since been called the Kensington Rune Stone.
Located upon the stone were a series of symbols that was later determined to be groupings of letters that were once used throughout northern Europe, Scandinavia, the British Isles, and from about 100 B.C.E. to 1600 C.E. as an alphabet used for writing and was commonly referred to as Nordic Runes.  These Runes placed the date of the writing as being 1362.
Here is the translation of the writings:  “8 goths and 22 northmen on discovery trip from of west. We had camp by two skeeries one day’s journey north from this stone. We were to fish one day after we came home found 10 men red with blood and dead. AVM save from evil have 10 men by the sea to look after our ship 14 day travel from this island. Year 1362.”
The Goths were an East Germanic tribe of Nordic origin
Skeeries may refer to a number of geographical locations
It is possible to travel by boat to within thirty miles of
As you would expect this alleged discovery created a great deal of controversy in regard to authentic nature of this Rune stone from . You see this discovery could prove that there were Scandinavians traveling as far west as ; long before Christopher Columbus was even born.  The Rune Stone’s discovery offers compelling evidence that that (at least Kensington) was a destination for the Viking expeditions that are described in the oral stories that have been passed down for generations. These “stories” tell of expeditions by Lief Ericson and other as early as 1000 AD to the American Continent.
In fact, the Kensington Rune stone is perhaps the first real proof that was not the first to discover . The fact that Vikings / Norsemen walked our shores before Columbus came as no real surprise to the typical descendent of Norsemen, for they have heard the stories many times.
The most recent research strengthens the argument that the events described on the Rune stone, actually happened. First, the age of the stone and its markings have been authenticated which eliminates the accusation that Ohman; the farmer, completed the writings himself.  Bur I believe the most important finding is the fact that the symbol found on the stone which is known as the “Hooked X” was not known to be used in Nordic Writings until 1935 which is a full 37 years after the stone was discovered.

The Hooked X: Key to the Secret History of North America is a novel written by Scott Wolter who spent seven years studying numerous sources so as to better understand the origin of the “Hooked X” symbol that first appeared on the controversial 110 + year old artifact that is now called the Kensington Rune Stone.

The story actually begins, as I have described above, with the discovery of a 202-pound stone unearthed by a Swedish immigrant farmer named Olof Ohman, while he was clearing trees in preparation of a farming field in 1898. The stone contained a lengthy inscription of events that were carved in the language of Norse runes which has only been recently been deciphered completely.  You may see the translation above.
Here is an image of the
“Hooked X” symbol
that is located upon the
Rune Stone: 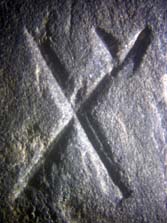 Posted by Tony G Fugate on 7/23/2011
Email ThisBlogThis!Share to TwitterShare to FacebookShare to Pinterest