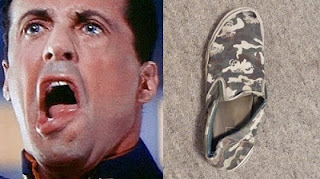 
Dad often told the story of being severely beaten late one night by several patrons of a small Paris tavern he frequented during his “tour of duty” in WWII torn France.  He always insisted the aggressors were certain he was a local Frenchman who had established the reputation of “small time swindler” who had somehow duped quite a few local Frenchmen (while dressed as an American ‘GI’ no less) into giving him their hard earned Franc’s.  A sad circumstance he learned some weeks after he recovered from his most unusually cruel thrashing.


In truth, I found Dad’s story of ‘mistaken identity’ a bit far fetched during my youth, but then, to my surprise, I encountered a similar case of ‘mistaken identity’ years later.  However on this particular occasion absolutely no form of hostility transpired.  While purchasing a quick lunch at a local “KFC” establishment as a very young adult, I was approached by a duo of similarly young adults for a personnel autograph.  You see, they were convinced that I was the “drummer” for the musical group whose concert they had attended the evening prior.


My denial of being said individual or even ‘knowing of’ said person only resulted in reassuring the young couple they were not mistaken.  Needless to say, I soon recognized the futility of continuing to forswear the accusation, so ever so reluctantly I granted their request; however I was steadfast in refusing to add the post script, “drummer—Pink  Floyd” to my autograph.


We all know about Mistaken Identity when it’s used as a defense in sayyy ‘criminal law’; in such cases, the innocence of the accused or evidence of guilt are often times undermined by asserting that an eyewitness to the crime incorrectly thought that they saw the defendant, when in fact the person alleged seen by the witness was in fact someone else.


Genetic fingerprinting and DNA evidence is now commonplace; because of this, many convictions based on the testimony of eyewitnesses are being re-examined. Based upon recent statistics, more than 75% of the cases of DNA exonerations encompass erroneous eyewitness identification or ‘mistaken identity’.


Abraham Lincoln was successful in using mistaken identity in his defense of accused murder William “Duff” Armstrong in 1858.  By using a Farmer’s Almanac Lincoln argued that a witness could not have possibly recognized Armstrong in the moonlight, since the position of the moon (according to the almanac) on the night in question would not have provided sufficient illumination.


A famous case of mistaken identity in the United Kingdom is the case of Adolf Beck; in March of 1898 he was convicted and served seven years in prison as a swindler; Beck was released upon completion of his 7 year term, and then arrested again on the same charges before the actual swindler (a fellow by the name of John Smith) of similar appearance was arrested for the same offence.

In 1984, Ms. Jennifer Thompson was raped. During the attack, Ms. Thompson later insisted that she was able to study the attacker’s face during the ordeal, with hopes of identifying him if she managed to survive the attack. Police investigators presented her with a photo lineup and Ms. Thompson identified Ronald Cotton as her attacker. Twice, she testified against him, even though she had visited Bobby Poole, an incarcerated man who had boasted to fellow inmates that he had committed the crimes for which Cotton was ultimately convicted. Ronald Cotton serving 10.5 years of his sentence before DNA evidence conclusively proved that Poole was indeed the rapist; a charge to which he pleaded guilty.


Jennifer Thompson has since become a critic of the reliability of eyewitness testimony. Upon release, Ronald Cotton was awarded a $110,000 payment from the State of North Carolina, for compensation. Cotton and Thompson have since reconciled and become close friends; as a team, they tour the US in support of eyewitness testimony reform. Bobby Poole died in prison in 2000. 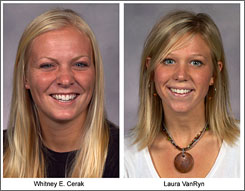 On April 26, 2006 two young college girls were among the students traveling with a group from Taylor University (located in Upland, Indiana, USA).   The students were involved in a violent crash in northern Indiana; a tractor-trailer slammed into the van they were riding in, killing five passengers.

19 year old Whitney Cerak and 22 year old Laura VanRyn looked a lot alike. So much alike, that the coroner investigating the traffic accident confused the one who died, with the one who lived.


Whitney’s family was told she was among the dead; they held a closed-casket funeral that attended by no less than 1,400 family members and friends.   Laura VanRyn’s family was told that their daughter was alive; in intensive care and in a coma-like state.

The VanRyn’s family, stayed by the injured young woman’s bedside for weeks. They posted a Web log detailing her recovery; it detailed the many small steps they believed their daughter was making, such as playing the game Connect Four and feeding herself applesauce.


On a Monday, the VanRyns reported: “While certain things seem to be coming back to her, she still has times where she’ll say things that don’t make much sense.”  Shortly thereafter (5 weeks after the accident) the VanRyns learned why: The recovering patient wasn’t their daughter. She was 19 year old Ms. Whitney Cerak.

Posted by Tony G Fugate on 5/25/2013
Email ThisBlogThis!Share to TwitterShare to FacebookShare to Pinterest 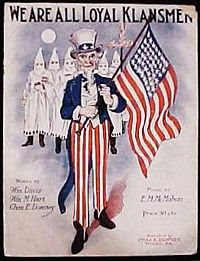 Six college students founded the Ku Klux Klan between December 1865 and the summer of 1866 in the town of Pulaski, Tennessee located about 70 miles south of Nashville.  Yep, they were all former U S Confederate officers; initially they figured to organize as a “social club”, (something like a fraternity) of a sort and spent their spare time in horseplay of various types, which included wearing disguises and galloping about town in the dark. They were actually quite surprised to learn that their nightly shenanigans were instigating fear, particularly among former slaves in the region. They quickly took advantage of this “side effect” and the concept began to rapidly catch-on throughout the south. Several factions formed in different states and towns, which led to a meeting in April of 1867 to codify rules and the organizational structure of the young organization or club.

At this meeting, a former Confederate General, Nathan Bedford Forrest, was elected “Grand Wizard”, or supreme leader, of all the Klan groups. To provide structure, the association was divided into a number of jurisdictions, regions, and groups; you could say on a basis similar to modern day Boy Scout Troops or Cub Scout Dens; which were in turn led by Grand Dragons, Titans, Giants and Cyclopes in the stead of Scout Masters or Den Leaders.  Beyond that basic structural style, there are few similarities.

You see, the policies of Southern Reconstruction - intending to expand the rights of Southern blacks -- had the unintended result of pushing hundreds of resentful and restless Confederate veterans into the new “Social Clubs”, which in short order began implementing a policy of violence that opposed the new social order; in other words, un-provoked hangings and cross burnings became common “shenanigan” activities.  Former slaves were the obvious targets of this style of terrorism, but the Klan also harassed, intimidated and even killed folks they suspected were from the Northern, such as judges, teachers, politicians and “carpetbaggers” of all kind.

By late 1867, the movement had spread throughout the small towns of the former Confederate South, though it did not initially take hold in urban areas, maybe because at that time the larger towns / cities were not suffering the economic hardships of rural areas.   Klansmen expanded their fight against reform by waging guerrilla warfare against what they considered a corrupt system depriving them of their basic rights; such as the right to own people, particularly those with a black skin hue.
Few of us realize that by 1869, internal strife led Klansmen to fight against each other as competing factions struggled for control.  In those early days of distributing destruction and violence by members of the Social Club, the Klan’s reputation led the more prominent former Confederate members to drop out entirely because local chapters had become difficult, if not impossible, to control. As a result criminals and the dispossessed quickly filled the void.  In fact, former Confederate General, Nathan B. Forrest (the first Grand Wizard), officially disbanded the organization in disgust and the vast majority of local groups followed his lead. Never the less, several local units or clubs continued to operate but were eventually disbanded or sent “underground” by US (Federal) troops.

This action more or less led to further feelings of grievance, which actually had their beginnings during the early days of the first Klan. So the stage was set for the Klan’s feelings, ideology, and hatred filled activity to play throughout the 20th century against not only Black folks but Catholics and Jews were incorporated into the mix; in addition there was an expansion of “causes” that the Klan opposed or at least articulated.  Such causes were blatantly advertised by various forms of the available media in the early 1900’s. The ads were predominately in opposition to: various forms of drugs, bootlegging, political corruption, night clubs, road houses, violations of the Sabbath, unfair business dealings, sex or just scandalous behavior.

Today (2013) there is often an overlooked danger in America. You could say such a “state” has existed beginning with the September 11, 2001, terrorist attacks of the Twin Towers in New York City.  Since then, the attention of the American public has been fixated on foreign terrorist groups such as al Qaeda and perhaps understandably so.  Even when domestic terrorism surfaces such as that in Boston of resent date, the emphasis is generally first on flashy neo-Nazi organizations, weapons-fixated militia groups, or anti-government ideology groups like The Posse Comitatus, for which charters were first issued in 1969 in Portland, Oregon.  Posse members by the way believe there are no legal forms of government above the local county level and no higher law authority than a county sheriff.

In any event, the Ku Klux Klan is America’s oldest terrorist organization and has never really gone away; more importantly, it has never stopped trying to create terror. There still remains at least eight major groups and around 40 minor ones, comprising roughly 110 chapters or as they like to call themselves these days, “Klaverns”.  The fact is Klan groups are still the most common type of hate group in America.  Every year, member and sometimes sympathizers of Ku Klux Klan groups commit crimes ranging from simple acts of intimidation to major hate crimes and even terrorism.

Today’s Klan members are apt to adopt one of two public stances. Some, taking a cue from David Duke -- former Republican Louisiana State Representative for the 81st district (1990–1992) and founder of the Louisiana-based Knights of the Ku Klux Klan for which he is a former Grand Wizard -- have attempted to “mainstream” their image.  They often use politically correct synonyms in place of racial slurs and proclaim pride in their “heritage” rather than hatred for other groups such as Catholics and those of the Jewish faith. Some even participate in state-run, good-citizenship activities such as “Adopt-a-Highway” cleanup programs, which often attract free publicity.   On the second front, Klan members / organizations consider themselves strictly “old school” and take pride in their heritage as a terrorist group.  They routinely take a confrontational approach to law enforcement and make no effort to hide or tone down their beliefs.

Perhaps because the Klan is universally familiar, Americans are more apt to ignore or even to laugh at it; never the less it’s a serious mistake to underestimate the hatred that’s characteristic of the Klan’s ideology and the violent criminal acts that this ideology often motivates its devotees to commit.