The Complexity of Language And the Tower of Babel 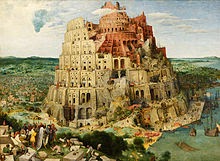 The most extensive catalog of the world’s languages, generally perceived to be as authoritative as any, is that of “Ethnologue”, a comprehensive reference publication that catalogs all the known living languages.  Its detailed list as of 2013 sited 7,106 languages and dialects in the world today.  Of which only 230 are spoken in Europe, while 2,197 of the total are spoken in Asia.

During pre-contact times, in North America, over 300 languages were spoken. Of these, about half have died out completely.  Today (2014) about 165 indigenous languages remain; eight are spoken by as few as 10,000 people.   Nearly 75 are spoken only by a handful of older folks, and can be assumed to be on their way to extinction. While you might think this is an unusual fact about North America, in large part, due to the overwhelming pressure of European immigration over the past 500 years, it’s actually close to the norm.

The origin of the language you speak can be sub-divide into several theoretical approaches but with some underlying assumptions:

“Continuity Theories” are build on the idea that language exhibits so much complexity that one cannot imagine it simply appearing from nothing in its final form; so it must therefore have evolved from earlier pre-linguistic systems among our very ancient and primate ancestors.

“Discontinuity Theories” basically take the opposite approach — that language as a unique trait cannot compare with anything found among non-humans and must therefore have appeared fairly suddenly during the course of human evolution.

A few views see language mostly as an “Inborn Faculty” - largely genetically encoded; while other notions suggest that language is a “Cultural System” — learned through social interaction.

The “Inborn Faculty” theory may be the source for the old joke: “I would adopt that Vietnamese (etc.) child, but I can’t speak its language”; if so, the “Cultural System” certainly proves the flaw in that way of thinking.

A majority of “Linguistic Scholars” of late (2014) hold “uninterrupted flow” theories, but they vary in how they envision the actual development of language.  Among those who see language as mostly “inborn”, avoid speculating about specific forerunners in nonhuman primates (such as monkeys & apes); stressing simply that the language faculty must have evolved in the usual gradualist way over thousands of years.  Others in this intellectual camp hold that language evolved not from primate communication but from primate cognition / reasoning, which is much more complex.

Primates encompass 300 or more species; it’s the third most diverse order of mammals, after rodents and bats so why do humans have around 7,000 distinct languages while others apparently have none?  A good question, but a question none the less, that’s without a good answer.  In their efforts to explain the multitude of languages, nonspiritual theories have pretty much come up empty. You could say they have been upstaged by the biblical narrative, which credits God with the gift of language as well as the vast diversity of different language families.

Biblical history indicates that the diversity of language emerged from the area of “a plain in the land of Shinar.”   You may not know that the Land of Shinar was once a general geographic term for what is today Iraq, known in ancient times as Mesopotamia.   In this region, two of the greatest of ancient empires, Assyria and Babylon, were located.   Shinar you see is mentioned very early in Bible History, it being the location of the famous “Tower of Babel” that was constructed their many years after the Great Flood.

You probably already know how the story goes: Long, long ago many, many generations after Noah and his Ark survived the Great Flood; all the folks of earth spoke the same language.   As fate would have it, an unusually large number of these folks saw fit to travel to a plain in the Middle East. Turns out that many a traveler decided to settle down right there, in large part because most everyone got along with each other so well; this in turn helped stimulate their skills for building tall buildings and just generally helped with expanding the city.

Then one afternoon during a scheduled break from work they said to one another, “Let’s build a city and a tower, and let’s make a name for ourselves, so we won’t be scattered around the whole earth.”  So, wouldn’t you know it for the next 47 years they toiled mightily six days a week trying to construct a tower designed for worshiping the sun, moon and the stars!

What these ancient builders probably didn’t realize was that this action was a direct refusal to obey God’s command to go out and fill the earth. To add insult to injury, the tower’s design was for worshiping God’s own creations instead of the Lord Himself.

In those days it was pretty common for the Lord from time to time to have a little “look see” at the city, and especially check-out the tower these people were building; after all, a lot of folks had started insisting that the tower when finished would be nothing short of a Stairway to Heaven; which some say led to the song with the same name by Led Zeppelin in late 1971 (Click Here to have a listen).

Yep, the Lord he was “pissed”; he said, “Behold, the people are organizing as one group and since they all speak the same language, nothing they imagine to do will be held back from them. Let us go down and confuse their language, so that they cannot understand each other’s speech.” So the Lord mixed up their language, which caused them to stop building the tower and quit expanding the city.

That’s how the name of that city ended up being called “Babel”; you see Babel, or ancient Babylon, some 65 miles south of modern day Baghdad, Iraq actually means confusion; so right there in down town Babel the Lord multiplied language on the earth, which resulted in causing the surviving people to scatter everywhere, which is exactly what the Lord wanted for some reason.

It depends upon who tells the story but some versions say that the Lord was so angry that day that he destroyed the Tower, for example in The Book of Jubilees, which is occasionally called “Lesser Genesis”, (an ancient Jewish religious work composed of 50 chapters) . . .  in its version the tower had parallel walls, was built with bricks of clay, and is described as being 5,433 cubits and 2 palms, or 2,484 m (8,150 ft.) tall just before it was destroyed — that’s about 1.6 miles high.

Before you get all “google eyed” about the reported height of the tower, you might like to know that simple elementary arithmetic shows that a tower with parallel walls could only have been built to a height of 1.3 miles before the bricks at the bottom were crushed.  It certainly seems that this little factoid may have been embellished a good bit over the years and naturally, the Biblical record does not indicate whether ruins of the Tower still exist, but if they did, they would be located in what is now Iraq near modern day Baghdad.

In any event the story of the tower only offers an explanation as to why the various cultures of the world speak so many diverse languages.  The same folks who relate the Tower of Babel story will tell you that the all inclusive language spoken by everyone on Earth prior to the “confusion event” was simply a result of creation.

Regardless, a conclusive scientific account of how and when mankind developed the ability to verbally communicate with and to each other and why so much diversity exists between the many languages used may never be forthcoming.