Being a Shaolin Monk / Priest

It’s got to be Hard Work 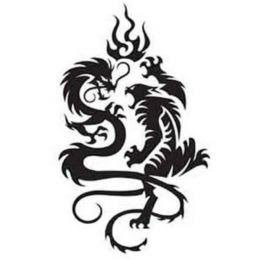 The Shaolin Monk tiger and dragon tattoo
With regard to oriental culture, and the Chinese Zodiac, the Dragon is a female sign that signifies the defender and the Tiger is a male sign that represents the aggressor. The Dragon and the Tiger are interpreted in the same way as Yin and Yang. They indicate the duality and balance that can be attained in opposing forces.
In ancient the Tiger and Dragon were the symbols for the Shaolin monks. The monks had five main temples, one of which was the in Honan, located in north east . This temple location was used for the 1970s TV series Kung Fu.
The Shaolin order dates to about 540 A.D., when an Indian Buddhist priest (named Tamo in Chinese), traveled to to see the Emperor. At that time, the Emperor had directed local Buddhist monks to translate Buddhist texts from Sanskrit (an Indo-European language that is the ancestor of most of the languages of north and ) to Chinese. The intent was to provide the general Chinese populace the ability to practice the religion taught by the Shaolin order.
Following considerable time and difficulty with the Chinese monks (they initially thought he was just another foreign busy-body), Tamo was allowed to spend time with the Buddhist monks inside there temple, where he found the majority of the populace to be in extremely poor physical condition. Tamo (the priest from ) managed to offset this weakness by teaching them moving exercises, designed to both enhance energy and build strength. These activities are considered the beginnings of Shaolin Kung Fu.
As time marched on, this Buddhist sect became more and more distinctive because of the martial arts being studied their. I’m not saying that Tamo “invented” martial arts. In fact, martial arts had existed in for centuries. But on the other hand, within the confines of the temple, it became possible to form the martial arts being taught there into a new and different style that would in time become without a doubt that of the Shaolin.
One of the many problems faced by western historians is the apparent contraindication of Buddhist principles of non-violence coupled with the Shaolin legendary martial art skills. The true Shaolin practitioner is never an aggressor or attacker, nor does he or she use this most devastating defense in any given situation. Rather, the study of kung fu leads to a better understanding of violence, and accordingly how to avoid conflict without hostility.
In the Shaolin arts, monks live within temples owned and maintained by the order; most stay there for there entire life, however once they become masters they occasionally choose to leave the temple; from that point forward they are referred to as Priests.
In the real world of the Shaolin, both monks and priests alike shave their heads and practice celibacy; these reasons alone, I expect, are more than enough to reduce wide spread participation everywhere, although the non-violent life style seem to be a great concept.
On the other hand, the late David Carradine’s Kung Fu character, Kwai Chang Caine, had long un-kept hair and on more than one occasion he  fraternized with women. In addition, he was quite the Kung Fu master.  Perhaps his Shaolin order is the best way to go. Regardless, either route is too hard a job for me!
Sources …                                                              http://squidlog.net/tigertattoodesigns/chinese-tattoos/the-meaning-of-a-dragon-and-tiger-tattoo/ http://en.wikipedia.org/wiki/Kwai_Chang_Caine                              http://www.shaolin.com/historycontent.aspx                                            http://en.wikipedia.org/wiki/Kung_Fu_(TV_series)

Posted by Tony G Fugate on 11/02/2011
Email ThisBlogThis!Share to TwitterShare to FacebookShare to Pinterest