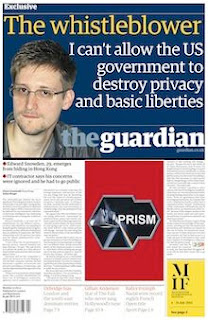 He was a technical contractor and Central Intelligence Agency (CIA) employee who worked for ‘Booz Allen Hamilton’ (a contractor for the National Security Agency who is perhaps the most prestigious technology consulting firm in the world), until he decided to leak details of classified NSA mass surveillance programs to the press; most notably a variety of top-secret NSA programs, including the interception of telephone records at telecom giant Verizon; further, (surprise surprise) he says the same holds true for internet records at Google, Facebook, Apple and other US internet giants.   In other words, Snowden leaked to various press organizations that the US National Security Agency (NSA) is in the business of gathering intelligence, and ‘secretly’ no less, even in foreign countries like China.


The naïve young man who sometimes calls himself “Verax” (that’s Latin for ‘the truth teller’) grew-up in Wilmington, NC; dropped-out of high school as a teen but successfully obtain his GED at 19 after relocating to Ellicott City, Maryland (a part of the affluent Baltimore-Washington DC Metropolitan Area) with his family.

Take note that this task (the GED) required two tries and he actually made some effort to obtain a college Degree by working on line at the University of Liverpool just a few years ago (2011).


In May of 2004, Snowden enlisted in the United States Army as a Special Forces recruit but did not complete the training; he was discharged apparently four months later after having broken both of his legs in a training accident.


In 2006 he described himself as a “computer wizard”; this followed his employment as a ‘NSA’ security guard for ‘The Center for the Advanced Study of Language’ at the University of Maryland (now we know where “Verax” came from).  He made this descriptive comment after joining the Central Intelligence Agency (CIA) to work on computer security in “Ars Technica”, which is noted as being an online forum for computer hackers and gamers.


The “Guardian” published its first exclusive based on Snowden’s ‘leak’ on June 5th of 2013; disclosing a secret court order which revealed that the US government had forced telecoms giant, Verizon, to hand over the phone records of millions of Americans – including mom, dad, sister, brother, etc.

A second story on June 6th reveals the existence of the previously undisclosed program  “Prism”, which in-house NSA documents claim gives the agency “direct access” to data held by Google, Facebook, Apple and other US internet giants.


For some mysterious reason certain US officials and agencies are bound and determined to make his “declarations” or  “leaks” (as un-surprising as they may be) an international incident.  Today June 23rd of 2013 Snowden left Hong Kong (where he has apparently been hiding for 3 weeks or so) on a flight to Moscow, after reports were released by the news media that in Russia he had a friend.  In the mean time, in a public news release, the Hong Kong government insisted documents submitted by the US to hold him, did not “fully comply with the legal requirements under Hong Kong “law” so it (the Hong Kong government) had no legal basis to honor such a request.


The unsuccessful efforts to ‘capture’ 30 year old Snowden by the US with the ‘help’ or ‘assistance’ of would-be government friends like Russia, China, Hong Kong, and etcetera merely amplifies the  low standing or status the vast majority of the world’s population holds for Americans in general.


Add the caveat that as of today (June 23) a petition to pardon Edward Snowden has reached its goal of 100,000 signatures in the US.  In short, the petition asks that President Obama pardon the NSA leaker and under Whitehouse.gov guidelines 100,000 signatures is supposed to prompt an official response from the administration.  Such revelations accelerates the broad range of thinking on the issue of whether Snowden is ‘traitor’ or ‘hero’ by the average American and re-assures the non-American citizens of the world that US policies are flawed at best.


There is some chance that Snowden is simply an idealistic young adult, starved for attention.  Until such time that he starts or shows evidence of an intent to release names of real American spies (NSA might even use the very surveillance tactics he’s been leaking) that may lend the possibility of causing genuine harm to the US, her allies or their citizens, perhaps the reasonable approach to the current fiasco is to simply deny Edward Snowden the opportunity of re-entering the United States.  You see, America may never have a “friend” that will detain him long enough for capture or otherwise deport him back to the United States for a proper trial but exile from the country is just a good idea; think of the dollars saved that could be applied to the national deficit and couple that with avoiding world-wide embarrassment.    Seldom does international politics offer an opportunity for a win, win, scenario; especially for the US. This is surely an exception.

Posted by Tony G Fugate on 6/24/2013
Email ThisBlogThis!Share to TwitterShare to FacebookShare to Pinterest

Prior to December of 1973, Claude Vorilhon was a French race-car test driver and an ex-pop star. Of recent date, Vorilhon is best known for establishing the Raëlian Movement which led to changing his name to “Raël”; allegedly meaning “messenger of the Elohim”. Well, actually he was a singer as a teenager and a test driver as a young adult.  You see, during his mid and late teens, he was known as “Claude Celler” who released 6 singles, one of which was a minor hit (Honey and Cinnamon) prior to 1970; then stemming from his desire to purchase a race-car, in his early 20’s he first wrote about race-cars and eventually fulfilled his desire to own one, with test driving them instead of buying one.


You might say that Vorilhon worked as a sports journalist to gain access to the world of auto racing; later he began his own publishing house.   According to his publication The Book That Tells the Truth, at the tender age of 27 he witnessed an event that dramatically changed his life; he observed a flying saucer landing in south central France and interacted with its occupant, when an extraterrestrial exited from the spacecraft and spoke to Vorilhon. This creature gave its name as “Yahweh”, not to be confused with the Hebrew God of the same name, and identified itself as a member of a race of beings called the “Elohim”.  The alien was well over a meter (a bit under 4 feet) tall, had long dark hair, eyes shaped like almonds, olive colored skin, and the being “radiated both harmony and humor”.


Yahweh promptly explained to Vorilhon that the Elohim race had created all human life on Earth some years back via genetic engineering; that this event had been long forgotten by humanity throughout the world and that many of the sacred texts of mankind mistakenly speak of ‘creator-gods’ that came from the sky such as Jupiter of ancient Rome or the other Yahweh (the Hebrew / Christian God).

Further, he explained that the good Elohim folks had been watching humanity for sometime now and guided human progress from time to time through specially-chosen prophets whom they educated.  Such profits include well known individuals such as Buddha, Moses, Mohammed, and Jesus (who was a human-Elohim hybrid by the way, and whose miracles were accomplished through alien technology).


Yahweh proceeded to point out to young Claude that in lite of the fact that humanity had reached such a high level of scientific development, so as to allow man-kind to understand this factoid, the Elohim folk had devised plans to reveal their existence, and, you guessed it, they’d chosen Vorilhon to be their ambassador so to speak.


Today the religion of Raëlian claims a minimum of 70,000 members in 97 countries.  It is most noted for its enthusiasm for genetic engineering and human cloning; allegedly an attempt to follow in the footsteps of our alien creators several thousand years ago. The Raëlian front group, “Clonaid”, made world wide news in 2002 with their claim to have successfully cloned a human being. Unfortunately, no evidence for this was ever presented, and the claim is widely thought to be a hoax.


According to a recent book by Raël (formerly Claude Vorilhon) Intelligent Design: Message from the Designers; research and development by the Elohim beings have proven scientifically no less, that our universe is merely one atom of a much larger cosmos, and that each atom in our universe contains a smaller universe in turn, and so on, some say without end.


It may be of some interest to know that Raëlism officially describes itself as an atheist religion, this being the case because it does not demand belief in one or more supernatural beings. However, in every other respect, it resembles traditional religion, right down to the miracles performed with a little help from advanced alien technology. For example, years ago, the “repulsion beam” parted the Red sea so that  Moses and the Israelites could cross to the opposite side, thus escaping from their Egyptian captors; yep, that was Elohim technology, and you should know that all manner of prayer is said to put an individual in telepathic communication with the Elohim folk. Life after death is easy because Raël claims the Elohim can recreate an entire individual including personality and memory from a single cell of a dead body.  Fact is this has been going on for several thousand years – in addition, according to Raël, the Elohim scientists have for years now, recreate the wicked as well as the good, so that they (the wicked folk) can be punished for their misdeeds.