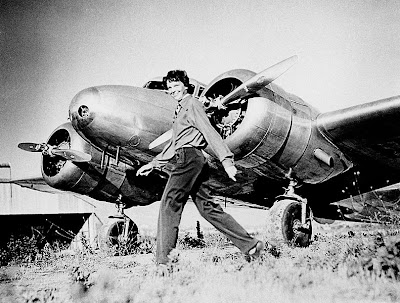 
Born, Amelia Mary Earhart in Atchison, Kansas; located in the northeastern portion of the state, situated near the banks of the Missouri River on the 24th of July 1897; six years before the Wright brothers had their historic flight on a then remote Atlantic Ocean beach  in Kitty Hawk North Carolina. She moved around a lot as a child, but was able to complete her high school education at Hyde Park High School in Chicago in the year 1916.  Her first attempt at college was in Rydal, Pennsylvania but left school after visiting her sister who was attending a college in Toronto, Canada in 1917.


While in Toronto, she visited a military hospital that cared for returning WW I casualties, and was so touched that she took a first aid course after which she volunteered as a nurse’s aide at the Spadina Military Hospital in Toronto.  While there, her favorite amusement, during her free time was watching airplanes take off and land at a nearby air-field.


Beginning in 1919, Amelia tried college as a pre-med student at Columbia University in New York City, but during summer vacation in 1920 she visited her parents in Los Angeles where she experienced her first airplane ride.  As a result she soon became obsessed with becoming a pilot; she gained employment as a truck driver and worked for the telephone company during her endeavor to obtain the funds ($1,000.00) required for training lessons.


Her first solo flight was in 1921. The next year, on her 25th birthday she purchased a bright yellow Kinner Canary, her first plane with the financial help of her mother and sister. At that time there were less than 100 female pilots in the United States.


In 1930, a group of 99 women aviators formed the first flying club exclusively for women, Amelia was the “99 Club’s” first president. In July of the same year, she set the woman’s flying speed record of approximately 180 miles per hour. In February of 1931, George Putnam and Amelia Earhart wed, which some expected to signal an end to her flying career. But within two months, Amelia set another world record, for the highest altitude in an auto-gyro (sometimes described as a hybrid flying machine that utilizes both the rotor of a helicopter and the propeller of an airplane) by a woman, reaching 18,400 feet. A mere two months passed and she attempted to complete her first solo transcontinental flight in the same auto-gyro.


Among many of Ms. Earhart’s accomplishments, both before and after her presumed passing, include but are not limited to the following:
Her second unsuccessful venture began in early 1936; when Amelia started to plan for a ‘round-the-world flight’. It would not be the first to circle the globe, but it would be the longest at 29,000 miles (47,000 km), with plans to follow a demanding equatorial route.


Amelia and her navigator, Fred Noonan, departed Los Angeles, California on May 21, 1937 and headed east; on June 1, 1937 they started their official trip, departing from Miami, Florida.


With several stops along the way that included rest, refueling, and repairs, the two arrived at Lae, New Guinea on June 29, 1937. They had flown 22,000 miles at that point and had 7,000 more miles to go; all of which was over the vast Pacific Ocean. Following repairs on various flight instruments, including the direction finder, Amelia and Fred departed on July 2nd. They had no less than 1,000 gallons of fuel in the tanks which was expected to cover at least 20 hours of flying time.


However, nineteen (19) hours into the flight, they sent a message saying their gas was ‘running low’. Forty-five minutes later Amelia transmitted their position. Neither Amelia Earhart nor Fred Noonan was ever heard from again.


It is generally believed that they veered off course and ran out of fuel, disappearing just north of the equator, somewhere between Hawaii and Australia. However, no conclusive sign of them has yet been found and this in and of itself has resulted in a shroud of mystery surrounding their disappearance.


The official search efforts lasted until July 19, 1937; a total of 17 days. At 4 Million Dollars, the air and sea search by the Navy and Coast Guard was the most costly and intensive in U.S. history up to that point in time.  Despite the unprecedented search by the United States Navy and Coast Guard no physical evidence of Earhart, Noonan or the Lockheed Electra 10E was found.


Immediately after the end of the official search, Putnam (her husband) financed several private searches, but no trace of the plane or its occupants were found.

Back in the United States, Putnam took the necessary actions to become the trustee of Earhart's estate so that he could pay for the searches and other related bills. In the probate court of Los Angeles, Putnam requested to have the “death in absentia”
seven-year waiting period waived so that he could manage Earhart's finances and help pay for the searches. As a result, Amelia Earhart was declared legally dead on January 5, 1939.


Many theories have emerged after the disappearance of Earhart and Noonan. Two possibilities concerning the flyers' fate have prevailed among researchers and historians:


The theory that the Lockheed Electra 10E simply ran out of fuel and Earhart and Noonan were forced to ditch at sea is the most widely accepted explanation for the disappearance.


In 1988, a second theory began to be seriously considered when the International Group for Historic Aircraft Recovery began a project to investigate the Earhart/Noonan disappearance and has since sent six expeditions to the west Pacific island, commonly known as Gardner Island. This theory suggests that Earhart and Noonan may have flown without further radio transmissions for another two and a half hours along the line of position Earhart noted in her last transmission, thus having arrived at then-uninhabited Gardner Island (now known as Nikumaroro); landed on an extensive reef flat near the wreck of a large freighter (the SS Norwich City) and ultimately perished.

This theory is supported to some extent by TIGHAR's research which has produced a range of documented archaeological and circumstantial evidence supporting this hypothesis / belief.  For example, in 1940, Gerald Gallagher, a British colonial officer and licensed pilot, radioed his superiors to inform them that he had found a
“skeleton... possibly that of a woman”, along with an old-fashioned sextant (a piece of equipment used to determine navigation / direction) box, under a tree on the island's southeast corner. He send the remains to Fiji, where in 1941, British colonial authorities took detailed measurements of the bones and determined they were from a male who was about 5 feet 5 inches tall. However, in 1998 upon further analysis of the measurement data by forensic anthropologists it was indicated that the skeleton had belonged to a “tall white female of northern European ancestry”. The bones themselves unfortunately, were misplaced in Fiji long ago and have not yet been recovered.


In 2007, a TIGHAR expedition visited Gardner Island searching for identifiable aircraft artifacts and DNA evidence or other relics. The group did find remnants of uncertain origin on the weather-ravaged isle, including three pieces of a pocket knife and fragments of what might be a broken cosmetic glass jar, along with bronze bearings which may have belonged to Earhart's aircraft and a zipper pull which could have come from her flight suit.


In 2010, the research group said it had found bones that appeared to be part of a human finger however DNA testing at the University of Oklahoma proved inconclusive as to whether the bone fragments were from a human or from a sea turtle.

On March 20, 2012, the US State Department and TIGHAR together announced that TIGHAR was launching a new search based on the re-evaluation of a 1937 photograph taken of the reef at Nikumaroro / Gardner Island. The new expedition was called “Niku 7”; the project began in July of 2012 with plans to undertake an underwater search off the islands’ reef.  However they did not find any objects that appeared to be plane shaped, but some still speculate that the plane may have broken up as it washed out to sea.

In-any-event, Amelia is proof positive that to become an international celebrity, being of the male gender is not a prerequisite — All the same, the affection and admiration the world holds for her even today is unsurpassed; as it’s likely to always be.

Posted by Tony G Fugate on 4/22/2012
Email ThisBlogThis!Share to TwitterShare to FacebookShare to Pinterest