The 8th Continent of Earth: Zealandia

Perhaps Atlantis Was the 9th … 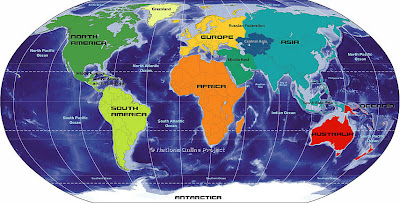 is Shaded in Red East of
the Australian Continent
Zealandia, also known as the continent, is almost a completely submerged continental fragment that sank beneath the waves of the Pacific after breaking away from somewhere around 60 to 85 million years ago, this huge event occurred after separating from the continent of between 85 and 130 million years ago. The two events may have occurred near the same time, but current research is unable to make such a determination. Further, it may have been completely submerged until about 23 million years ago, and most of it (93%) is still submerged beneath the .  Its largest inhabited land mass that remains above water  we call ; and may be a good example of the smallest.
For the last hundred years or so official geology has declared that continents cannot or do not rise or sink.  This argument has been used foremost in efforts to discredit the legend of the ill-fated continent of Atlantis.  But geologists now agree that evidence of recent date proves the existence of a sunken Pacific continent (Zealandia), which is being termed the 8th continent.
This discovery alone is perhaps the strongest evidence to date that the civilization or the landmass Plato called Atlantis may have gone in and out of existence several times within a period of several million years, regardless, this information certainly suggests that calling Atlantis the 9th continent is reasonable.
But on the other hand, perhaps it wasn’t a continent at all, after all Plato call it a “large island”; is an island country that is now considered just a portion of the much larger continent of Zealandia.
In the late 18th century Benjamin Franklin theorized or supposed that the continent of Africa and were once connected as one. Geologists have since learned that he was right. Somewhere around 20 million years ago these two continents were united. Sometime thereafter a giant rift or separation occurred. Naturedly as the two land masses divided, the surrounding water rushed in to fill the gap between them, as a result the was born. Africa and continue to drift apart about 5 centimeters (1 inch = 2.54 cm) per year, and have been doing so for the past 20 million years!  The real estate that is now submerged beneath the is called the “Mid-Atlantic Ridge”.  Armed with this information, I’ll let you figure out where the was most likely located before it sank beneath the waves.
OK so back to the topic at hand, there has been some speculation that the continent of Zealandia is likely to re-emerge above the waters of the Pacific one day which will result in a significant rise in the sea levels throughout the world due to the water displacement factor created by such an unfortunate event. So you see, the constant threats of  asteroid or meteor strikes, earth quakes, mega volcanoes, or global warming that may ultimately cause you to have a really bad day are not the only calamities we can not possibly prepare for.
Sources ...
http://en.wikipedia.org/wiki/Zealandia_(continent)              http://www.historykb.com/Uwe/Forum.aspx/what-if/20176/Zealandia-WI-not-espplausible                                                                            http://www.platetectonics.com/oceanfloors/africa.asp
http://www.nationsonline.org/oneworld/small_continents_map.htm

Posted by Tony G Fugate on 11/25/2011
Email ThisBlogThis!Share to TwitterShare to FacebookShare to Pinterest