Lost Treasure from US Civil War 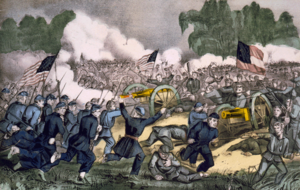 Confederate gold is often described as the many hidden caches of gold reportedly lost after or during the American Civil War. Millions of dollars worth of gold was lost or is unaccounted for following the U S civil war; which has peaked the interests of historians along with hundreds of treasure hunters. Some say much of the Confederate gold was hidden in order to wait for the next rising of the South while others claim such actions were taken simply so that the would not gain possession of the treasure.  But then sometimes the Confederates had nothing to do with hiding away the treasure.

Here’s one example of a typical occurrence regarding what I’m referring to: During the war, Confederate raiders captured a Union convoy heading from to the Mint. The convoy's treasure included some 15 tons of silver bars; alas it was stolen and hidden inside a remote cave north of . The rebels sealed the mouth of the cave but never returned for the plunder. Some say it's still out there waiting to be found or claimed by you.

Here’s another legitimate account: General Nathan Bedford Forrest was perhaps the most feared Confederate cavalry commander in the “western” theater,  of the Civil War. He was considered by his Union opponents as being shrewd, intelligent, fearless, and a master of strategy.

Being well aware of Forrest’s reputation, Union brigade commander C.L. Dunham was somewhat apprehensive when he marched his 1,500 man Calvary troop / brigade into camp at Dollar Hill just outside in late December of 1862. You see, Dunham’s orders seemed simple, to “seek out and destroy” General Bedford Forrest’s Confederate cavalry brigade; a directive which he recognized as no small task to fulfill.

As Dunham was unsure of the likely outcome of the upcoming battle to be fought, he ordered a lieutenant and two enlisted men from the 39th Iowa Regiment to bury the brigade’s payroll chest which contained gold coin. The three elected to bury the payroll chest a short distance from a nearby spring.

Immediately following the battle, a heavy downpour of cold rain fell, which soon mixed with the blood of the dead into the soil at Parker’s Crossroads. Unfortunately for the surviving soldiers, among those who lost their lives in the battle were the aforementioned lieutenant and the two enlisted men who had buried the brigade’s payroll chest.

When the survivors of Colonel Dunham’s defeated brigade returned to Dollar Hill they found the entire area a sea of mud and standing water. Despite repeated attempts by Dunham’s men to locate the burial site of the brigade’s payroll, they were in the end, unsuccessful.

This is only two accounts of lost treasures of the Civil War but there are actually hundreds more which you can research or investigate as an amateur treasure hunter in such places as , for example; there the Confederate Treasury, in route from is said to have been lost or hidden.  Some say it was buried somewhere on the grounds of a nearby plantation and others claim it was merely stolen by bandits.

In regard to this Confederate Treasury, for some reason the victorious US Army was of the opinion that the treasure had in fact been hidden as is clearly indicated by their immediate actions: The entire plantation family was taken to to undergo rigorous interrogation. They were questioned thoroughly as to the whereabouts of the gold, but the family could not or would not tell anything that was not already known. They were released after a few weeks and soon returned to their beloved plantation.

Posted by Tony G Fugate on 11/09/2011
Email ThisBlogThis!Share to TwitterShare to FacebookShare to Pinterest