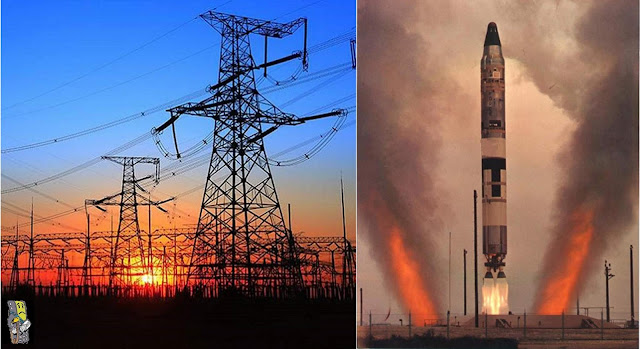 Is it all just another bad dream?

Ahhh, the 21st Century; isn’t it a great era to be a part of and in which to live! To be perfectly honest, you’d easily admit, another fantastic gadget seems to enter the market place on a monthly basis these days . . .

With this pleasant thought still lingering in the recesses of your mind, you silently give thanks that you finally invested in that “smarter phone” that became available early last week.

This evening’s planed events may even justify its purchase. Well, it’s not limited to just making calls from most any locality to anywhere in the world, hell, it can take pictures, and forward them to “friends” of choice, it allows the viewing of movies, listening to music or reading the latest novel; it’s a pocket calculator, it makes a good flashlight in a pinch, it grants access to the world wide web, but best of all it will present verbal turn-by-turn directions to within 3 feet of a friends front door step, using satellite GPS coordinates . . . Sooo, this evening while in-route, you’ll “Google” dinning reservations with that new up-scale Dinning Theater you heard about for tomorrow evening (of course, by way of the smarter phone); just for the two of you, and with that same “cell phone” you’ll call ahead and ask your friend to “prepare” / “set” the dinning table because you also ordered your favorite meal for two - via the local on-line GrubHub service; with guaranteed delivery to your friends place later this evening.

Finally, upon reaching you destination, your late-model car’s “Mystery Lady” warns you it’s still 91° outside the temperature controlled environs of your auto; it’s then, you decide that it is a good idea to notify your “friend” that you have arrived (again, via your smarter phone) and you’re especially glad you did because when you exit the car (with smarter phone safely stored in your pocket) you’re taken aback by the extreme humidity as and the excessive heat, meaning “Mystery Lady” was only half right about the environment beyond the car’s interior . . . You can’t help but briefly hope that the main entry door opens during your brief approach, as the relative humidity (RH) must be near 95% and it really is quite stifling to  breath － fantastic, the front door is opening!

Upon entering the confines of the elegantly styled home you quickly recover your shortness of breath in the perfectly balanced / conditioned atmosphere . . . Obviously, the handy work of a modern cooling system. From the front door’s entryway you note the electric “candles” strategically placed upon the “setting for two” dinning table, located just beyond the compact yet plush “living” area.

Since this was your first visit to this friends new abode, per request, you perform a standard “look-about” . . . A “ceremony” that will require complimentary acknowledgments of the many tasteful appliances and equally convenient gadgets strategically located throughout the home. Aside from the perfectly performing AC system, this includes (to name the most obvious), such modern house-hold basics as the 60 inch TV entertainment center complimented by the classic soft / dim lighting arrangement in the living area; there’s an extra wide refrigerator-freezer, a fully electric range-top & oven island, a microwave, a garbage compactor, a built-in Dish Washer, and a triple-tubed kitchen sink with near instant access to hot water with an attached disposal unit － all in the Kitchen Area.  When exiting the domain of the kitchen, a short hall opens to the right; within a few feet, again on the right, a door-way opens the into a large combined Half Bath and Laundry Room fitted with a stacked “HE” washer/ Dryer set; the room appears to lead outside into a small but amply fenced back yard fitted with a miniature, somewhat attractive, cascading water display of some sort. Across the hall opposite the Half Bath and Laundry Room entrance is an informal Study / Office Area, with what appears to be a state-of-the-art Apple PC with a matching printer. The short hall way ends with a doorway leading into a rather large Master Bedroom and Master Bath . . . The bedroom is equipped with yet another wide screen TV and a compact sound system that is emitting a soft pleasant tune; just beyond the King bed there is another exit onto a wooden deck which boasts what appears to be a 2-person hot-tub.  In other words, most all the conveniences of a typical modern home . . . Hardly any of which will work without electricity!

Within 15 minutes beyond the “tour”, GrubHub’s service “shines” as you evening meal arrives right on time . . . The environment, in a word, is simply “perfect” . . . Then, within a blink of the eye the electric “candles” loose their soft glow, the music streaming from the Master bedroom is suddenly silent and the time display on the kitchen Microwave is now pitch black!  Your heart rate speeds a bit and in the dead silence - you can actually hear you friend breathing.   Instinctively checking your smarter phone for the exact time; surprise, surprise, it too is dead!
Sooo, were you and what were you doing when the Catastrophic event occurred (most likely it was a Nuclear Electromagnetic Pulse or EMP)? Yes, you’d heard there was considerable risk that it was going to happen; political hacks have been predicting it for months; most said it was only a matter of time. Okay, so now that it has happened, just how long will the “Power” be off and what, again, is an EMP?

Well, first, an Electromagnetic Pulse (EMP) is a very concentrated burst of electromagnetic (EM) energy caused by a sudden or rapid acceleration or surge of charged particles. A common example is a lightning strike; occasionally such events (lightning strikes) give rise to short term localized electrical current disruptions in nearby electrical grids. Such current surges can damage sensitive hardware within your home such as unshielded (absent surge protectors) computers, TV’s, Radios, and similar electronic appliances.

A less common but much, much more destructive EMP occurs following the detonation of a hydrogen bomb at a high altitude; such an event would generate a powerful EMP over a large geographic area. In the simplest of terms, pure chaos is suddenly the way of life! Yep, this means sudden death to that new smarter cell phone you just bought and the land line too; your TV’s, radio’s, and computer’s - all dead. Then it gets worse as all airborne planes simply fall from the sky while trains, and automobiles, so dependant upon electric circuitry, in best case scenarios, ‘slow’ to a stop, rather than ‘crash to a stop’, because of all the tiny “fried” computer circuitry built into such common modes of transportation.
Yep, the electrical grid has been “fried” as they say; sooo, count on it taking months or years to get the power back on. Okay, now may be a good time to take a look-see at the drawing displayed below: 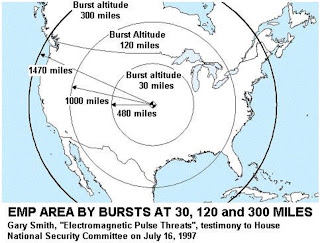 A high altitude blast (detonation at saaay, 300 miles above the Earth’s surface) will create a pulse that will nearly cover a 1500 mile radius, disabling the entire U S electrical grid, plus, most of Canada’s and Mexico’s.

Yep, that means no refrigeration, no A/C or heat, no lights, no phones (cells or land-lines) or internet communications.  No computers or computer based gadgets of any sort (even simple hand-held calculators), no access to your bank funds and very shortly no running water.  It will literally send folks back to the dark-ages, and most wouldn’t know how to survive for more than just a few days. In fact, studies predict that 9 out of 10 Americans will die within two years following an EMP as described above; millions will die in just the first few weeks and as many as 500,000 folks will die within the first hour or two.
That’s right, a major EMP strike will shut down US power for up to 10 years. The entire grid will have to be rebuilt. To fix it, the U S will have to spend over Two (2) Trillion Dollars within the first year or so. 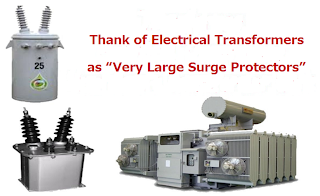 First, and most critical, will be the thousands of either ‘pole mounted’ or ‘ground based’ transformers that’s used to make up the vast majority of the U S electrical subsystem; you see, they insure the grid’s day to day uninterrupted operation.

Damaged transformers, such as those usually seen on poles or inside fenced lots can usually be repaired or replaced quickly if necessary and the good news is that they do currently have built in protection in case of a surge such as a localized lighting strike.  However, they do have limits, just like the ugly little surge protector you use for your computer. So, if the grid transformers were in proximity of the detonation point of the recent high altitude EMP burst, most failed; totally!

Sense dozens, no, hundreds or even thousands of these transformers have been destroyed, electricity providers and their repairmen are going to have the near impossible task of locating and installing all the “back-up” or replacement transformers needed. Scores will require being shipped from around the world and that will take time - and keep in mind, just communicating such needs will be no small task . . . And too, when they finally arrive, transporting the replacement transformers to the “failed sites” becomes a problem as all those handy service trucks with the convenient “electric over hydraulic lifts” remain in ruins, but replacement units from the three European manufactures are suppose to be in route.

Beyond the basics of finding ample food clothing and shelter, if you want to survive the aftermath of the EMP, most experts strongly suggest you get creative and dig up gadgets, appliances, or vehicles built back in the 1960s or earlier; as they will have likely survived the EMP event . . . You might want to know there are a few notable exceptions in the automobile line though; for example the 1984 Chevrolet Blazer, the 1983 Ford Bronco, 1979 Jeep CJ5’s, or the 1972 Volkswagen Beetle should have survived too. Of course, just as difficult as finding one of these “beauties” in running condition, will be finding an ample fuel supply and perhaps just as important, a parts supply for your ‘new’ EMP “resident” mode of transportation . . . Now you know why you neighbor, ole man Buccus, took so long and spent so much on restoring that ‘56 Willies with only genuine 50’ era parts!

To make matters worse, this whole EMP thing has left the country susceptible to a mainland attack by just about any ambitious contemporary nation who has looked upon our society / civilization with a reproachful eye. You see, with our Humvees, helicopters, missiles, jets,  ships and submarines out of commission - we will be at a huge disadvantage . . . Thank goodness, a few hundred were stationed well beyond the EMP event but they have been extremely slow in arriving from their assigned bases beyond the Continental U S.  Local rumor has it that they’re awaiting direct orders from “High Command”

Now for the last of the really bad news: All of this disarray could have been avoided! That’s right, for a mere Two (2) Billion Dollars, the Government could have retrofitted most of the grid with protection against an EMP blast / pulse - now if you’ve been paying attention, compare that to the Two (2) Trillion Dollars someone is going to have to “cough-up” within the next 12 months to get things on the road to recovery.  Well yeah, Two (2) Billion Dollars is a lot of money, but comparatively it’s one tenth of one percent (0.1%) of the Two (2) Trillion Dollars that will be spent within the first year of many years to come . . . Oh, you might also want to know that U S Governments receivables in 2017 (well before all this happened) was a modest 3.6 Trillion Dollars.

Despite how unlikely it was that this would ever happen, our government has failed us all; completely!