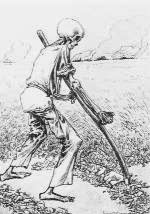 The influenza or plague of 1918-1919 killed more people than the Great War (known today as World War I or WWI); infected an estimated 500 million people worldwide – about one-third of the planet’s population at the time – and killed an estimated 20,000,000 to 50,000,000 men, women, and children. Other estimates run as high as 100 million victims however exact numbers are impossible to know due to a lack of medical record-keeping in many places throughout the world.

Regardless, it has been referred to as the most overwhelming epidemic in all of world history. More people died of influenza in a single year than in the four-years (1347 to 1351) of the Bubonic Plague or Black Death (75,000,000 dead), a topic discussed / posted here in June of 2011.  This killer is known in the annals of history as the “Spanish Flu” or “La Grippe”; yep, the influenza of 1918-1919 was quite the global disaster.

On planet Earth, in the fall of 1918 World War I was winding down and peace was on the horizon. The United States had joined in the mighty conflict, bringing the Allies closer to victory against the Germans.   Deep within the trenches fighting men on both sides lived through some of the most brutal conditions of life; some undoubtedly thought conditions could not possibly get worse. Then, in pockets across the globe, something burst forth that at first seemed as benign as the common cold. The influenza of that season, however, was far more than the cold. Within the two years that this scourge ravaged the earth, 20% of the world’s population was infected. The flu was most deadly for folks ranging in ages between 20 and 40. This pattern of morbidity was uncommon for influenza which is usually a killer of the elderly and or young children. It infected 28% of all U.S. citizens.   In America, an estimated 675,000 died of influenza during the pandemic, that’s ten times more than in the world war (WWI).

Of all U.S. soldiers who died in Europe, 50% of them fell to the Spanish Flu and not to the hands of the enemy. In other words, an estimated 43,000 servicemen mobilized for WWI died of influenza.  The ravages of war coupled with the Spanish Flu have placed 1918 as an unforgettable year of suffering and death and yet of peace, since as you’re sure to recall, at long last, (11/11/18) ushered in an end to “the war to end all wars”.

The influenza pandemic quickly encompassed the globe. Practically all of humanity felt the effects. It spread near and far along trade routes and shipping lines. Outbreaks swept through North America, Europe, Asia, Africa, Brazil and the South Pacific.

In India the mortality rate was exceptionally high at around 50 deaths from influenza per 1,000 people.   The Great War, with its huge movements of armies aboard ships, is generally believed to have expedited its rapid circulation and attack. The origins of the deadly flu disease were unknown but speculation abounded.  A few of the allies suspected the epidemic was a biological warfare tool of the Germans. Others thought it was a result of the trench warfare, the use of mustard gases and the generated “smoke and fumes” of the war.

In-any-event, the origins of this influenza variant is not precisely known. It is thought to have originated in China in a rare genetic shift of the influenza virus. The recombination of its surface proteins created a virus unique to almost everyone.

Recently the virus has been reconstructed from the tissue of a dead soldier and is now being genetically characterized. The name of Spanish Flu came from the early affliction and large mortalities in Spain where it allegedly killed 8 million people in May of 1918. However, a first wave of influenza also appeared early in the spring of 1918 in the state of Kansas and in military camps throughout the U.S.   However, few noticed the epidemic in the midst of the war.  In fact, there was virtually no response or acknowledgment to the epidemics in March and April in the military camps.

It was unfortunate that no steps were taken to prepare for the usual recurrence of the infectious influenza strain early on because these first epidemics at military training camps were a sign of what was coming in greater magnitude in the fall and winter of 1918,  and not just in the U.S, but for the entire world.

A study attempted to make sense of why the disease was so devastating in certain localized regions, looking at the climate, the weather and the racial composition of cities.   Meanwhile the relatively new sciences of “Infectious Agents” and “Immunology” were racing to come up with a vaccine or therapy to stop the epidemic.

The pandemic affected everyone. With 25% of the US and 20% of the world infected with the influenza, it was in all practically impossible to escape the illness. Even U.S. President Woodrow Wilson suffered from the flu in early 1919 while negotiating the crucial peace treaty in Versailles, France to end the World War. The few folks who were lucky enough to avoid infection had to deal with the “little inconveniences” associated with public health ordinances designed to contain the spread of the disease.

For example, the public health departments handed out gauze masks to be worn in public. Retail stores could not hold sales; funerals were limited to only 15 minutes. Some towns required a signed certificate to enter the city limits and railroads would not accept passengers without them. Those who chose to ignore the flu ordinances had to pay rather large fines.  Some communities shut down public places, including schools, churches and theaters; people were advised to avoid shaking hands and to stay indoors; libraries stopped lending books and regulations were often passed banning spitting on the streets.

Lifeless bodies soon pilled up as the massive deaths of the epidemic progressed. Other than the shortage of health care workers and medical supplies, there was a scarcity of coffins, morticians and gravediggers. During what was perceived as “the modern era” the state of affairs in 1918 were not so far removed from the Black Death in the era of the Bubonic Plague of the Middle Ages.

In Short, the Spanish Flu took a heavy human toll, wiping out entire families and leaving countless widows and orphans in its aftermath.

The flu was also detrimental to the economy. For example in the U.S., businesses were forced to shut down because so many employees were sick. Basic services such as mail delivery and garbage collection were stalled due to flu-stricken employees. In some places there was a shortage of farm workers to harvest crops.

By the summer of 1919, the Spanish Flu pandemic came to an end, slowly as those that were infected either died or developed immunity. Nearly 90 years later, in 2008, researchers announced they’d discovered what made the 1918 flu so deadly: A group of three genes enabled the virus to weaken a victim’s bronchial tubes and lungs and clear the way for bacterial pneumonia.

Recently ‘Old’ news (December 2013) played as ‘New’ news,  regarding bacteria that are resistant to antibiotics and the regulations designed to limit “feeding” those antibiotics to animals in our food chain with the intent of promoting  growth, clearly indicates the worse is in all likely-hood yet to come.