The   & Sub-Saharan Africa
The Stone Age, Bronze Age, and Iron Age each refer to the chief material used for tools and weapons associated with the various stages in the history of man.
At first, these ‘ages’ were used as classifications for dating historic artifacts found in areas such as Europe or Asia, but they’re not referred to quite as often as they once were, because, as it turns out, dates varied drastically for the uses of these materials around the world.

Some civilizations even skipped a period; for example Sub-Saharan Africa went straight from stone to iron skipping the Bronze Age altogether and the American natives never got out of Stone Age until after the era commonly known as European exploration.

Beginning a few hundred years before 10,000 BC all tools and weapons were made of stone / flint, this included axes, spear points, arrow heads, and such.   During the latter years (about 7,000 hard years later) of the Stone Age or the Neolithic period, humans began to make limited use of copper (there were / are small amounts of pure copper found in nature), which could be hammered or melted and then formed into tools or weapons.  As time marched on in the Neolithic period, the technology of smelting (“melting” out of ore by heating it with fire) emerged in , thus allowing copper to be extracted from copper ore.   While copper can be used for tools and weapons, it is considered to be too soft a material to be reasonably effective. It was eventually discovered that by blending copper with tin, a much harder metal can / could be created that came to be known as bronze.

In any given region, the Bronze Age is considered to have begun when bronze became a material used for constructing tools and weapons. The term “Bronze Age” is typically not used if only a few bronze tools were being made, or if bronze was only being used for creating jewelry.

The Bronze Age of Eurasia (Europe & Asia) spanned from about 3000 BC to 1000 BC. Like the Neolithic period, it began in , and spread in all directions. It took roughly a thousand years for the Bronze age to cover the entire east-west span of mainland Eurasia, from the Atlantic (Western Europe) to the Pacific (China); naturally, it also spread northward and southward during this time span. So, by 2000 BC, most of had made the transition from the Stone Age to the Bronze Age.

The story of the Iron Age is quite similar. It began in as well, in about 1000 BC, shortly after smelting pit designs had advanced sufficiently to produce the higher temperatures needed to smelt iron ore. Within about five hundred years, it completely covered the east-west span of Eurasia; within this time line, most of had transitioned to the Iron Age by 500 BC.

The Iron Age (like the Bronze Age before it) spread easily to North Africa, but the greatly delayed its spread to Sub-Saharan Africa. Accordingly, the Iron Age did not reach the southern tip of the African continent until sometime around 500 AD, and remember, this region of southern completely missed the Bronze Age.
The transition from the Bronze Age to the Iron Age was critical not because of any superior physical property of the metal itself as most folks might think, in fact although the Bronze Age came before the Iron Age, bronze is actually superior to iron in several ways; for example: it is less brittle, it has a lower casting temperature, it resists corrosion and rust, and it’s stronger, but then iron is overwhelmingly more abundant than copper and tin. This fact enabled man-kind, for the first time in history, the ability to truly mass-produce metal tools and weapons for both agricultural purposes and warfare alike. Such metal implements are far more effective than stone in both endeavors, a fact that the good folks of the era eagerly accepted.

As for the pre-colonial , the Bronze and Iron ages have little relevance. Prior to the arrival of Europeans in the late 1400’s (think Columbus in 1492), the Bronze Age was reached only by the South American Inca Empire who was conquered by the Spanish in 1532.  Even though gold, silver, and copper were commonly used in pre-colonial American art, the Iron Age did not occur at all.

Posted by Tony G Fugate on 3/18/2012
Email ThisBlogThis!Share to TwitterShare to FacebookShare to Pinterest 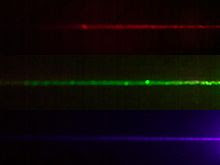 Laser beams (color: red, green, & blue)
A laser is a device that emits light through a process of optical amplification or in general terms, the amplification of a light signal.  Laser beams are famously employed as advanced weapon systems in science fiction flicks, but today’s actual laser weapons are still in the experimental stage. The general idea behind laser-beam weaponry is to hit a target with a short train of brief light pulses. The resulting rapid evaporation and expansion of the surface causes shockwaves that damages or destroys the target. But, the power needed to project a high-powered laser beam of this kind is beyond the limit of current modern mobile powered technology. 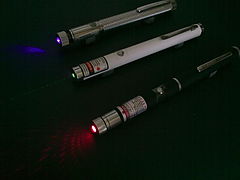 Posted by Tony G Fugate on 3/12/2012
Email ThisBlogThis!Share to TwitterShare to FacebookShare to Pinterest 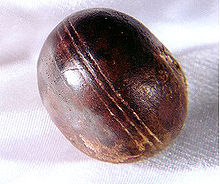 Klerksdorp spheres are small objects, often spherical to disc-shaped, that have been collected by miners from 3-billion-year-old pyrophyllite (a mineral composed of aluminum silicate hydroxide) deposits mined by Wonderstone Ltd., just east of the central part of . They have been cited by alternative researchers and reporters in books, popular articles, and many web pages, as inexplicable out-of-place artifacts that could have only have been manufactured by intelligent beings. 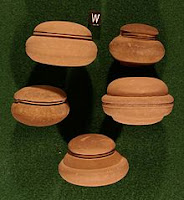 Posted by Tony G Fugate on 3/07/2012
Email ThisBlogThis!Share to TwitterShare to FacebookShare to Pinterest 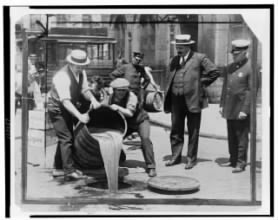 Prohibition disposal
(public domain photo from Wikimedia Commons)
Prohibition was a period of almost fourteen years of American history in which the manufacture, sale, and transportation of liquor, or alcoholic beverages were made illegal. It resulted in the first and only time an Amendment to the U.S. Constitution was repealed; the law was responsible for a number of other unforeseen things as well.
Starting in 1920 and thank goodness (for several reasons) ending in 1933, the often called “Noble Experiment” was a time that’s most often characterized by speakeasies, glamour, and gangsters; it was a time during which the typical citizen was guilty of breaking the law.
Following the American Revolution, consumption of alcoholic beverages was on the rise. In an effort to combat this, a number of groups were organized as a part of the new Temperance (self-control) movement which come up with the idea that people in general should not become intoxicated. In their infancy or early years, these organizations recommended moderation, but after several decades, the movement’s focal point changed to absolute prohibition of alcohol consumption.
The Temperance movement blamed alcohol for any number of society’s ills, particularly crime and murder. Saloons came to be considered little more than a social haven for bad men who lived in the still untamed “wild west”.  They were viewed by many, especially women, as places of outright wickedness and evil. A nation wide law requiring prohibition, members of the Temperance movement argued, would put a stop to husbands spending all of the American family’s income on liquor and at the same time prevent accidents in the workplace caused by all those workers who drank during lunch.
Technically it was the 18th Amendment that went into effect on January 16, 1920 that established Prohibition, but it was the Volstead Act (passed on October 28, 1919) that made the law crystal clear. The Act stated that “beer, wine, or other intoxicating malt or vinous (resembling or containing wine) liquors” pertained to all beverages that contained more than 0.5% alcohol by volume. The Act also stated that owning any items designed to manufacture alcohol (like moonshine stills) were illegal and the Act further set specific fines and jail sentences for those individuals caught violating the Prohibition law.
As is the case with many other unreasonable laws, there were several loopholes which allowed people to legally drink during Prohibition. For example, the 18th Amendment did not mention the actual drinking of liquor. So when Prohibition went into effect after the 18th Amendment’s ratification, a lot of folks had planned ahead by buying multiple cases of then-legal alcohol and storing them for personal use at a later date. You might say a lot of people saw it coming, and took the most reasonable action. In addition, The Volstead Act allowed alcohol consumption if it was prescribed by a doctor. As you might guess, there were large numbers of new prescriptions written for alcohol.
Those people who could not or did not buy cases of liquor in advance or know a “good” doctor who would write prescriptions for their alcohol fix; well, there were illegal ways to drink during the Prohibition era. In fact, the circumstance gave rise to a new breed of gangster. These industrious folks quickly recognized the amazingly high level of demand for alcoholic beverages within society and the limited avenues of supply to the average citizen. As a result of this imbalance of supply and demand, gangsters saw a huge profit opportunity.
Can you believe it; these gangsters would hire men to smuggle in rum, whiskey, and bourbon from places like , the , and or simply hijack whiskey from nearby and bring it into the   Others would purchase large quantities of liquor made in such far off places as homemade stills right here in .
These very same gangsters would then open up secret bars typically called ‘speakeasies’ for those folks who hadn’t planned ahead, of didn’t have a “good” doctor available, so they could come into a speakeasy to drink illegally, or in the alternative,  just  socialize.
During this era, a lot of the newly hired Prohibition agents were given the responsibility of  raiding speakeasies, finding illegal stills, and arresting gangsters; alas, many of these agents were both under-qualified and underpaid which, you guessed it, resulted in a high rate of bribery.
Almost immediately following the ratification of the 18th Amendment, several organizations were formed, whose sole purpose was to repeal it. Folks soon realized that the perfect world promised by the Temperance movement failed to materialize and more people joined the fight to bring back liquor. As the 1920’s progressed, the anti-Prohibition movement gained strength, often arguing that alcohol consumption was a local issue and not something that should even be considered by / in the U.S. Constitution.
Such re-thinking was hurried along with the Stock Market Crash in 1929 and the beginning of the Great Depression. People needed jobs; the government needed money; so making alcohol legal again would open up many new jobs for citizens and create additional tax opportunities for the government; it all began to make pretty good sense.
On December 5, 1933, the “Noble Experiment” was officially killed when the 21st Amendment to the U.S. Constitution was ratified. This Amendment repealed the 18th Amendment, making liquor once again legal, at least in the eyes of the Federal Government.
Although Congress proposed the Twenty-first Amendment on February 20, 1933, it was not ratified or adopted until December 5, 1933 by state rarifying conventions.  Both, Alaska and Hawaii were not states at the time of ratification, but there remains 8 U.S States that have not ratified the amendment, they include:  Nebraska, Kansas, Mississippi, Oklahoma, Louisiana, North Dakota, South Dakota, and Georgia; 38 were required.  It’s the only amendment to have been ratified by state ratifying conventions, specially selected for the purpose.  All other amendments have been ratified by state legislatures. It also remains the first and only time in American history that an Amendment has been repealed.
Sources:
http://history1900s.about.com/od/1920s/p/prohibition.htm
http://seattletwist.com/2009/12/05/celebrate-the-21st-amendment-part-4/      http://en.wikipedia.org/wiki/Twenty-first_Amendment_to_the_United_States_Constitution
0 comments