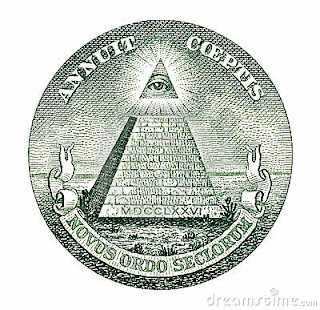 A symbol of the Illuminati Order
As most anyone already knows, the Illuminati are well known as the masterminds behind; well, nearly everything that has ever happened.  Just as you would expect, no one knows who they are or how they manage to pull it all off, but if there is a conspiracy of any kind, you can be sure that the Illuminati have or had a heavy hand in its development.


If you’ve lived in an unlighted cave for the last few years, and somehow missed the opportunity to listened to or hear American radio broadcaster Art Bell III (who is one of the founders and original host of "Coast to Coast"); then you might be surprised to hear that.


Then perhaps you’re like me and only heard of the Illuminati, after reading the works of American author Dan Brown wherein he repeatedly makes reference of such in his novels “The Da Vinci Code” and “Angels & Demons”, if that’s the case, I suppose we need to keep in mind that both the novels as well as the movies are works of fiction; however entertaining they may be.


The Illuminati (Latin for “enlightened”) is a name given to several groups, both real and fictitious. Historically the name refers to the Bavarian Illuminati, a secret society founded on May 1, 1776.


In the modern contexts the name refers to a ‘supposed’ conspiratorial organization which allegedly masterminds events and controls world affairs through secret governments and corporations to establish a New World Order. In this perspective the Illuminati are usually represented as a modern version or the continuation of the Bavarian Illuminati established back in 1776.


In actuality, the Illuminati was (was being the key word here) a secret society in Bavaria (currently a modern day southeast German state) in the late 18th century. They had a political agenda that included republicanism which is the ideology of governing a nation as a republic, wherein the head of state is generally elected publicly, and thus abolishing monarchies wherein a single individual ‘runs the show’.  They tried to institute this governmental philosophy by means of deception, secrecy, and conspiracy. They pictured themselves as being “enlightened” but they had little success and were destroyed within fifteen years of their origin.


Paranoid conspiracy theorists (PCTs) believe the Illuminati sect still exists, either in its original form or as a prototype for later formed groups.  Many PCTs believe that rich Jewish banking families have been orchestrating various political revolutions and conspiracies throughout Europe and America since the late eighteenth century, with the ultimate goal of bringing about a satanic New World Order.


These same folks will eagerly claim George H W Bush (the elder) was talking about this in his state of the union address to the US Congress back in January of 1991, when he made reference to ‘A new World Order’.  In fact they say the “hidden meaning” he implied was no less than for the establishment of a single world government with the anti-Christ, who some say is Bill Clinton; Barack Obama; or George W. Bush (the younger), at its head.


OK, so I went to U-Tube (http://www.youtube.com/watch?v=rbrMK5Qwwx0 ) to make sure and watched his speech or address, and it’s obvious that  the New World Order, as referenced by then President Bush, means a world where the strong would unite to defend the weak against invaders.  A world where countries such﻿ as China, France, Germany, Russia, the United Kingdom, and the United States have unified at last to create peace and 'A New World Order.'  In other words, to defend each other, as well as  other smaller and militarily weaker countries from aggression. In short he meant the formation of a strong alliance.

Posted by Tony G Fugate on 5/10/2012
Email ThisBlogThis!Share to TwitterShare to FacebookShare to Pinterest