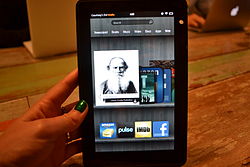 “Kindle Fire”
With Wi-Fi, Full Color 7" Multi-Touch Display
For those of us who remain “challenged” with today’s technology the Kindle Fire, as opposed to a “kindling fire” is a tablet styled version of Amazon.com’s Kindle e-Book Reader, in fact, you might simply call it a very small PC. Introduced on September 28, 2011, the Kindle Fire has a color 7-inch multi-touch screen with IPS technology and runs a forked version of Google’s Android operating system. The device includes access to the Amazon Appstore, streaming movies and TV shows, and in addition, Kindle’s e-books were made available on November 15, 2011.


The Kindle Fire retails for $199.00 US.  Analysts projected the device to be a strong competitor to Apple's iPad (16 GB Wi-Fi model) which sells for as much as $499.00 US.  Amazon’s business strategy or plan is to make money on the selling of digital content for the device, rather than through the sale of the Kindle Fire itself. Most market analysts agree that the plan’s working, as Kindle Fire has proven to be one of the few success stories for Android tablets; it sold an estimated 4 million units in the fourth quarter of 2011 alone, and it wasn’t released until the middle of November.


As implied above, customers received their first Kindle Fires on November 15, 2011, and during the following month of December, customers purchased over 1 million Kindle devices per week.


The device includes 8 GB of internal storage; described as being enough for 80 applications. That’s space enough for at least 10 movies, 800 songs or 6,000 books; you choose one of the three; or alternatively a combination of the three.  According to Amazon’s list of technical details, the Kindle Fire’s battery lasts for up to 8 hours of consecutive reading and up to 7.5 hours of video playback before recharging is needed.  Of the 8 GB of internal storage, approximately 6.5 GB are available for content.


Many basic features are covered, as well. You can browse the Web, e-mail your friends, read common document files (including Word, Excel, PowerPoint and others), view photos, and listen to stored music files.  In addition, there’s a common Micro-USB connection on the bottom of the Kindle Fire which allows you to easily connect to any Mac or PC which allows the easy transfer whatever content you may want.


If there’s a down side for software, it’s that you’re limited to the Amazon way of doing things though. You can download third-party apps, but they come via Amazon’s app store.  The “unspoken” deal you’re making with Amazon here is that in exchange for an inexpensive computer tablet, you’re agreeing to get your apps, your games, your books, your music, and your videos through Amazon services.


Nonetheless it's a benevolent dictatorship, and to be fair Apple runs its iPod Tablet the same way.  The good news is that Amazon’s services don't suck. Their music store for example is absolutely on par with iTunes in terms of selection, and their prices are cheaper in nearly every case.


To seal the deal, The Kindle Fire’s video menu ties directly in with Amazon’s digital video store, offering an impressive selection of movie rentals, downloads, and TV shows.  Just like the iPad, Amazon is receptive to the idea that offering competing services in this arena, such as Netflix, Hulu Plus, Rhapsody, Pandora, and others is just good business.


You can’t make a $199 tablet without cutting some corners, and Amazon cut plenty of them. Fortunately however, the company used a scalpel instead of a ‘Texas’ chainsaw.  However some omissions are obvious. To name a few, there’s no GPS, no cameras, no microphone, no compass, no gyro sensor, no calendar, and no card slot for extra memory. If there’s a deal breaker in that list, so be it.


In summation, the Kindle Fire marks an important milestone in the history of Android tablets. It can be said that the industry has been competing with Apple for acknowledgement of the fastest, thinnest, and the most feature-packed tablet, but Amazon has started its own race to make the first “good enough” tablet at a price best described as ‘game-changing’.

Posted by Tony G Fugate on 4/27/2012
Email ThisBlogThis!Share to TwitterShare to FacebookShare to Pinterest